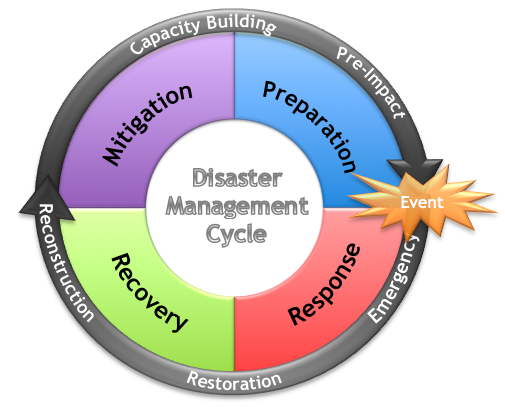 The Disaster management cycle illustrates the ongoing process by which governments, businesses, and civil society plan for and reduce the impact of disasters, react during and immediately following a disaster, and take steps to recover after a disaster has occurred. Appropriate actions at all points in the cycle lead to greater preparedness, better warnings, reduced vulnerability or the prevention of disasters during the next iteration of the cycle. The complete disaster management cycle includes the shaping of public policies and plans that either modify the causes of disasters or mitigate their effects on people, property, and infrastructure.

The first step of the disaster cycle is usually considered to be preparedness. Prior to a disaster’s occurrence, emergency manager will plan for various disasters which could strike within the area of responsibility.

The second stage in the disaster cycle is response. Imminently prior to a disaster, warnings are issued and evacuations or sheltering in place occurs and necessary equipment is placed at the ready.

Finally, using the lessons learned from the response, recovery, and mitigation phases of the disaster the emergency manager and government officials return to the preparedness phase and revise their plans and their understanding of the material and human resources needs for a particular disaster in their community.